The small coastal town of Hingham, MA is steeped in well-documented history. It’s rare to discover artifacts now, more than 375 years after the first settlers came ashore from Hingham, England. But, a few years ago, that’s exactly what happened.

Hingham was the woodenware capital of the colonies and the country from the time of the French and Indian War to the Industrial Revolution. Hingham woodenware and Hingham buckets were so widely used that Hingham was known as Bucket Town. More than 400 coopers produced a broad range of wooden containers and tools for household use during this period. These craftsmen also produced miniature boxes, buckets, and furniture as toys for children of the era.

When a descendant of one of those first settlers uncovered the intact workshop of his great-grandfather, what lay before him were the tools, patterns, raw materials, and workbenches of generations of toy and box makers. The shed also yielded finished boxes, miniature furniture, and toys all stamped by the cooper who crafted them.

The late Hingham historian John P. Richardson was called in to help document this long-buried treasure. Before the Industrial Revolution, Hingham’s woodenware and toy industries were world-famous. Hingham was the first community of professional toy makers in America. The Hersey shop and its contents were significant archetypes of Hingham’s industrial past.  Richardson felt this era was the missing piece of a triad of Hingham history: Church (Old Ship Church), School (Old Derby Academy) and Industry (Hingham Woodenware and Toymaking).

The timeline of Hingham’s industrial history mirrors that of the nation. Wooden canteens made by Hingham coopers were widely used by volunteer militia, including the Hingham Rifle Company, from Revolutionary times until they were replaced at around 1840 by tin canteens. Revolutionary War hero General Benjamin Lincoln helped to develop Hingham’s woodenware industry by garnering contracts to make canteens for the Massachusetts militia and the Continental Army. Later, coopers moved from working out of their own shops to working in factories such as the William Tower Toy Co.

Distinctive to Hingham boxes were the opposing “finger bands” on the lid and body. For decades, these boxes were mistakenly referred to as “Harvard boxes” because they were thought to have been made by the Shaker Community of Harvard, MA. These tools of daily life were found in virtually every home in New England, and reached as far as Canada and the West Indies.

Many Hingham toy makers also turned their talents elsewhere. Augustus Hudson was a master cabinetmaker, photographic instrument maker, and carver. Part of his beautifully carved sign at Hingham’s Torrent Fire Station has recently been restored. Loring H. Cushing, the most recognized member of the Hingham Society of Arts and Crafts, was nationally recognized for his colonial-style toy furniture.

While the discovery of the Reuben Hersey Toy and Box Shop was significant, it was just the beginning of a long research project. It is the anchor of the book, Bucket Town: Woodenware and Wooden Toys of Hingham, MA 1635-1945 . The book is a beautifully photographed history of an entire town and its industrial past, full of essays on many of these craftsmen.

Bucket Town author Derin Bray; the Hersey Family; and the Hingham Historical Commission, publishers of the book, have collaborated with Old Sturbridge Village to exhibit some of these items. The exhibit is the last in the series, Four Centuries of Massachusetts Furniture, a celebration of the legacy of furniture making in the state. This unprecedented partnership of 11 institutions throughout Massachusetts began in March, 2013. 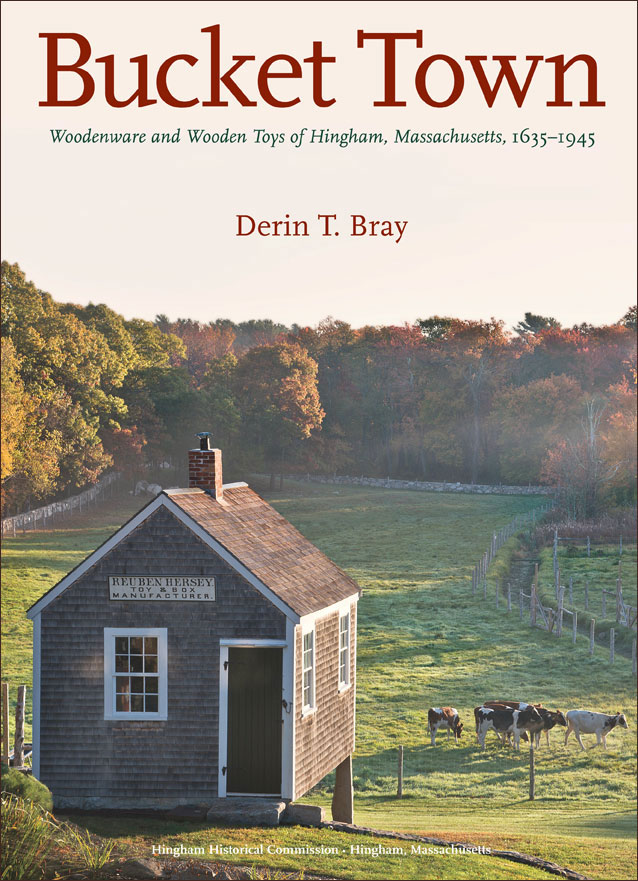 The book has just been publishied!

Developed by PJM Design | Content by Maryellen Dever
Back to Top